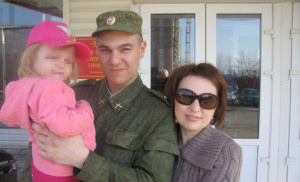 In the run-up to presidential elections and the FIFA World Cup, repressions against antifascists and anarchists started in Russia. In Autumn 2017, 6 people were arrested in Penza; several of them had weapons and explosives planted on them. FSB officers then tortured the antifascists right in the detention facility: they applied naked wires to the activists’ various body parts and turned the electricity on, they beat them up, hanged them upside down.

While torturing them, the agents made the activists learn by heart the story the FSB needed: they were supposed to confess of having founded and belonging to a terrorist organization called “The Network”. In late January 2018, two more antifascists were arrested in Saint-Petersburg. They, too, were beaten up, tortured with electric current, and forced to incriminate themselves by confirming they were members of the “Network”.

Dmitriy Pchelintsev left his home to pick up his grandmother and was arrested on October 27. Four FSB agents attacked him by his car, beat him up, threw him on the ground and took his apartment key.

They opened the door and broke into his apartment. During the search they turned everything upside down. They took smartphones, all data storage devices, two hunting rifles and two nonlethal pistols. All the weapons had been officially registered by Pchelintsev who worked as a gunnery instructor.

After the search, the agents got down to Pchelintsev’s car which had long had no functioning instrusion alarm and took two grenades from under a seat. It would not have been any trouble for them to plant grenades in an unprotected car.

At first Dmitriy Pchelintsev was not beaten up, even though he refused to incriminate himself. On the next day, he was arrested as a member of a “terrorist organization”. On the same day, his wife Angelina was called to the FSB, supposedly to witness her husband’s interrogation. In the bureau, two officers met her, one of them playing meaningfully with a stab awl in his hand. Another mentioned they “needed to shoot somebody in the leg” to make Pchelintsev confess.