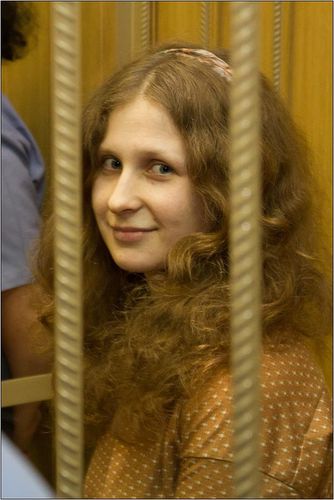 Maria Vladimirovna Alyokhina (Template:Lang-ru), also known as “Masha”, born Template:Birth date and age,<ref name="politzeky" /> is a Russian political activist. She is a member of the anti-Putinist<ref name="amnesty"/> punk rock group Pussy Riot. On August 17, 2012, she was convicted of “hooliganism motivated by religious hatred” for a performance in Moscow’s Cathedral of Christ the Saviour and sentenced to two years imprisonment. She has been recognized as a political prisoner by the Union of Solidarity with Political Prisoners.<ref name="rosbalt.ru" /> Amnesty International named her a prisoner of conscience due to “the severity of the response of the Russian authorities.”<ref name="amnesty" />

She is a fourth year student at the Institute of Journalism and Creative Writing in Moscow. She is an environmental activist with Greenpeace Russia, and has opposed development projects in the Khimki Forest. She was a volunteer at Children’s Psychiatric Hospital in Moscow. She has a five-year-old son, Philip. She is a vegan and reportedly collapsed from hunger during the trial.<ref name="nytimes.com" /> She played an active role in the Pussy Riot trial: cross-examining witnesses, and aggressively questioning the charges and proceedings.<ref name=NYT8812MA /> She said in her closing statement:<ref>Template:Cite web</ref>

Template:Persondata Will be imprisoned until 3rd of May 2014 г.