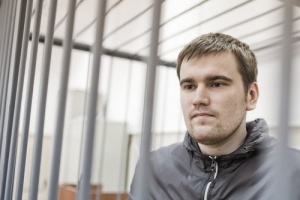 Alexey was sentenced to 3 years and 6 month in the prison settlement.

Detained on 28 April 2013. After questioning as a witness in the Investigation Committee, Alexei Gaskarova transferred to the status of a suspect and charged with offenses under Part 2 of Article 212 of the Criminal Code (participation in the riots) and Part 1 st.318 the Criminal Code (use of violence the representatives of the government) in a criminal case about the events on May 6 on Bolotnaya Square. According to the court in custody until 28.06.2013. Details of the case - http://en.gaskarov.info/

Alexey Gaskarov was arrested 30th of August 2010, as a prominent antifascist, social activist, after a demonstration of anarchists and anti-fascists which took place in city of Khimki in Moscow region 28ty of July. Demonstration was against outrages, connected with construction of new Moscow-St. Petersburg highway. Maxim Solopov was arrested one day before Alexey.

The next year, Alexey was cleared of all charges, Maxim got a suspended sentence.

You may read more about Khimki case from section http://www.avtonom.org/en/khimki of our website.