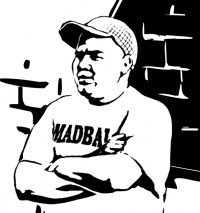 Alexey was arrested on the 12th of February, and has been in remand prison since then. He, together with Alexey Sutuga, is accused of having taken part in an incident in the Moscow club "Vozdukh", where on 17th of December, during a punk-hardcore concert, a conflict between the audience and the security took place. The club security, consisted of supporters of the far right, and were provoking guests. Due to the conflict, the concert was stopped prematurely, but the security attempted to take some guests hostage, threatening them with punishment from their friends - nationalist football hooligans. Concert guests resisted, the security opened fire with rubber coated metal bullets, but soon the concert-goers gained the upper hand and the security was neutralised and sent to the hospital.

Olesinov was already jailed once before on bogus charges. In November of 2008 he was arrested, for allegedly, having taken part in a fight with security in the club "Kult" in August of that year. Immediately after the incident, Olesinov was arrested, but released without any charges, as he had not committed even a misdemeanor and club security had not pressed any charges. However, the prosecutor demanded a 5 year prison sentence on the basis of the Second part of Statute 213 of the Russian criminal codex ("Hooliganism"). Thanks to a wide-spread protest campaign and a number of protests both in Russia and abroad, he was, eventually, only jailed for a year. However, this prison sentence damaged his health for good, and after this last arrest in February, he has had continuous health problems. He was diagnosed with an early form of tuberculosis, apparently contracted during his previous prison term, but he is not receiving proper medical care.

The remand court in the case of Olesinov has committed outrageous violations. The prosecutor claims that Olesinov was hiding from officials, and provided the judge with a warrant not to leave Moscow with Olesinov's forged signature on it, dated in the beginning of February. However, there is no way Olesinov could have signed such a paper in Moscow, since he had been staying in St. Petersburg the entire time since December.

More on the case of the Moscow prisoners: http://avtonom.org/en/mda