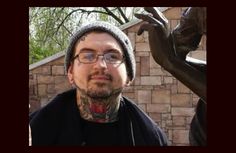 Eric G. King, a 28-year-old vegan anarchist, was arrested and charged with an attempted firebombing of a government official's office in Kansas City, MO in September 2014. Eric is being charged with throwing a hammer through a window of the building, followed by two lit Molotov cocktails. The criminal complaint states that both alleged incendiary devices failed to ignite. Scheduled to go to trial in July 2015, he is facing up to 30 years in federal prison.

Eric was identified as a suspect by local police because he had previously come under suspicion for anti-government and anti-police graffiti. He is currently being held in the Corrections Corporation of America's Leavenworth Detention Center.

You can also help Eric towards the costs of phone calls with friends and supporters to prevent him from being isolated, the costs of books and shipping to help him pass the time inside (much of which has been in solitary confinement), and commissary to help him purchase toiletry items and vegan food, as well as helping people to come support him by pack the courtroom for Eric's trial, by donating to Eric's Fundrazr account: https://fundrazr.com/campaigns/0yoZc/sh/a4jVK6