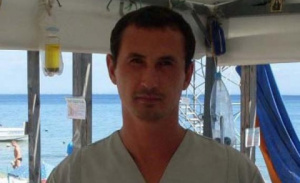 He is an anarchist and environmental activist, who stayed in Crimea after the Russian takeover in 2014, and continued to struggle. His activities to preserve the environment against touristic projects as well as activities against police brutality annoyed authorities, and some years after the takeover they began to find a pretext to lock him up.

Eventually, police digged up an old post from Evgeny´s social media from 2014, where he had reposted an interview of a small insurgent group of Primorsky partisans, who waged a short war against the local police in the Russian far east in 2010 (you may read more about this group, which had no clear ideology, but some past connections to National Bolsheviks from here ).

This post, and also some comments in a group chat, were a pretext to send him to 6 years in prison according to Part 2 of Art. 205.2 of the Russian criminal codex (public calls for terrorism). Evgeny has been unrepentant in prison, and as a result he has been sent to a notorious EPKT (Unitary Jail-Like Building) type prison. This prison type was specially designed in the 1980’s to break down prison resistance in Russia. First EPKT prison was the notorious “White Swan” in Solikamsk, which is nowadays an even more extreme prison for life sentence convicts. Many political prisoners are railroaded to these isolation units.

But Evgeny’s conditions are not soft either, for example he is only allowed one short visit every 6 months. He is writing a blog in Russian about his prison experience to 7x7 journal.