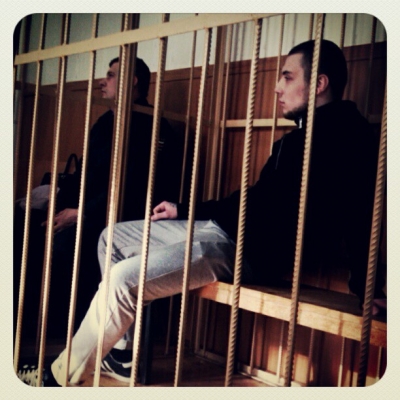 Igor was arrested in September 2011. He is accused of having participated in a fight on the 4th of July 2010, during which the audience of a punk hardcore concert dispersed a band of nationalists, who had come in order to kill and maim concert guests. Igor, however, did not take part in the fight - plenty of those present at the concert have given testimony, that during the fight Igor was performing in the concert. The whole case against Igor relies exclusively on the testimony of failed "race warriors", V. Sumin and V. Zhidousouv.

The true reason for the arrest of Kharchenko is an attempt by Moscow investigators to take revenge on their failure to jail anyone for the action by anti-fascists against the Khimki city administration on the 28th of July 2010. Igor's co-accused is Denis Solopov, one of the "Khimki hostages", who has received refugee status in Western Europe after UNCHR recognised, that the police investigation on the Khimki case was carried out with various violations, for example confessions gained through use of torture. Moscow investigators ignored the fact, that during this fight Solopov was in Turkey, which is confirmed by the stamps in his passport, and plenty of eye-witnesses.

The investigation also attempts to indict Kharchenko for "organising of an extremist community," according to statute 282.1 of the Russian criminal codex.

More on the case against Kharchenko: http://avtonom.org/en/people/igor-kharchenko

Butyrka prison has also a form, which you may use in order to send letters: http://wr1.fsin-service.ru/Letter-Client/main.html#new_letter However, this form is only in Russian and paying for the service (minimal payment is around 1.20 euros) requires either a Russian bank account or account in some internet payment system, common in Russia (such as yandex.dengi or webmoney). In form, you must indicate year of birth of Kharchenko - 1991.