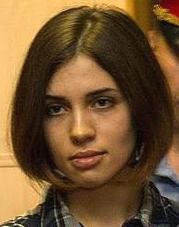 Released as the result of amnesty in December 2013

You may also write letters of support to pussriotsolidarity@gmail.com, from where they will be forwarded to imprisoned members of the group.

Nadezhda Andreyevna Tolokonnikova, born November 7, 1989 in Norilsk), also known as “Nadya Tolokno” (Надя Толокно), is a Russian political activist. She is a member of the anti-Putinist punk rock group Pussy Riot. On August 17, 2012, she was convicted of “hooliganism motivated by religious hatred” for a performance in Moscow’s Cathedral of Christ the Saviour and sentenced to two years imprisonment, together with Maria Alyokhina. She has been recognized as a political prisoner by the Union of Solidarity with Political Prisoners. Amnesty International named her a prisoner of conscience due to “the severity of the response of the Russian authorities.”

She is a philosophy student at Moscow State University with a history of political activism with the street-art group Voina. She is married to Pyotr Verzilov and has a four-year-old daughter, Gera. Tolokonnikova is serving the remainder of her two-year sentence in the IK-14 women's penal colony in the Republic of Mordovia.

Tolokonnikova has been a member of the Voina collective since 2007. Tolokonnikova was among the Voina members who disrupted a trial for the director of the Andrei Sakharov Center in 2009. In 2010, Tolokonnikova was among the Voina activists who attempted to release live cockroaches into the Tagansky Courthouse; the extent to which they succeeded in this action is disputed. She was later prosecuted in the same building for their involvement in Pussy Riot’s “punk prayer”. She also took part in a series of actions Operation Kiss Garbage. This project comprised female members’ kissing policewomen in Moscow metro stations and on the streets.