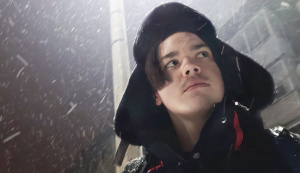 Nikita was born on the 17th of August 2005. Before his arrest, he was living in the city of Kansk in the Krasnoyarsk region, and had finished 8th class in school. Nikita is an anarchist, he was reading books by Kropotkin, listening to music of Yegor Letov, and studying guitar. He was interested of politics, he criticized the state and supported political prisoners.

10th of February 2022, Nikita was given a drastic 5 year sentence for terrorism-related charges, while two other accused were only given probational sentences. Nikita was sentenced according to statutes 205.3 (studying with a goal of engaging in a terrorist activity) and 205.4 (establishing of a terrorist organization) of the Russian criminal codex. Nikita denied all charges against him in court. But even this was not enough – on the 25th of February the prosecutor demanded to increase the sentence of Uvarov to 9 years. Uvarov has also appealed against his sentence.

News on the case of Kansk teenagers has been a bit misleading. Media started callingthe case the ”Minecraft case”, as some of the material involved the teenagers (Uvarov and other accused were 14 years old during the alleged ”crimes”) discussing about blowing up a FSB building in Minecraft. But despite these discussions being involved in the materials of the case, they were not a prominent part of the charges. The main reason why Uvarov and his friends were charged was because they were anarchists, and also for crafting some small explosives, which is a rather usual past-time for teenagers.

In this video, you may see Uvarov preparing for his last day in court, and possible immediate imprisonment.

In this video, a short interview of Nikita after his sentence: in which he tells how he was beaten and strangled by the FSB agents after his arrest.