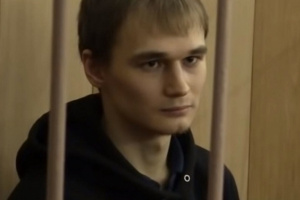 Azat sentenced to 6 years in prison for the action.

You can also send him a message online via RosUznik